Biosystematics and taxonomy – the disciplines that name, classify and determine the evolutionary relationships of all living organisms – are foundational sciences. Many other disciplines and activities in biology, including ecology, conservation, genetics, biosecurity, and medicine to name just a few, depend on the framework knowledge, nomenclature, and understanding of organisms provided by biosystematics and taxonomy.

The current low base of funding for biosystematics and taxonomy in Australasia means that, in effect, we are drawing on previous investment in this sector (the past two centuries of endeavour and effort to understand and document the flora and fauna of Australasia) but no longer adequately investing in the future (building capacity and knowledge of the many currently known or undiscovered species that have not yet been named, and keeping our knowledge scientifically updated and current). This lack of investment is of particular concern in Australasia, one of very few areas of mega-biodiversity in the world.

Inadequate investment in this sector leads to negative consequences, and often substantial economic costs, for conservation, biosecurity, and sustainable development and growth. Important species will become extinct before they are recognised and their conservation needs and potential ecological and economic roles understood. Emerging biosecurity threats will be recognised too late, compromising early responses and leading to inadequate control measures and increased mitigation costs. These impacts in turn will compromise sustainable development and reduce our ability to minimise the effects of the current global wave of extinctions.

This project seeks to turn this situation around. Led by a core group of leading taxonomists and biosystematists, it centres on developing a Decadal Plan for the scientific discipline of biosystematics and taxonomy in Australasia that will:

Decadal Plans have been developed for a number of sectors in Australian science by the Australian Academy of Science - a listing of these can be obtained here.

Read the brochure below for more detail 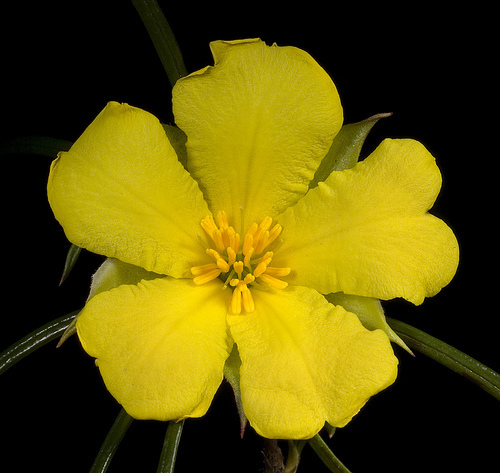 We've heard from our politicians recently that there's never been a more exciting time to be an Australian. That may or may not be the case. But, here's a story that shows why I reckon there's never been a better time to be an Australian botanist.
Hibbertia huegelii is one of the most common species of Hibbertia in Western Australia. Every botanist, wildflower enthusiast and naturalist knows it. It's common from around Morawa to south of Perth. At least - that's what we thought...
A few weeks ago I realised that I needed to look into H. huegelii when I found that I couldn't figure out exactly how it differs from another, less well-known species in WA, H. pachyrrhiza.
I assumed that a quick check through the specimens in the Western Australian Herbarium would sort this out. Pulling out a packet each of H. huegelii and H. pachyrrhiza (while I was at the Herbarium waiting for a student, to head out into the field to collect Banksia specimens for an Honours project), this at first seemed straightforward. The specimens of H. pachyrrhiza I looked at had obtuse leaves with a broad, shallow groove running down the midline, while the first few specimens of H. huegelii had very acute leaves with a distinct, narrow, deep groove along the leaf midline. This worked OK for a while - until I started coming across specimens in the H. huegelii packet that looked a lot like the ones in the H. pachyrrhiza packet. We all know how often something that starts out looking simple quickly becomes less so when you look at too many specimens. I left the Herbarium realising that I'd need to spend more time in the field during the coming spring trying to nut these species out.
An hour later, my student and I with some wonderful colleagues were in Wandoo National Park, at the first site where we were to collect our target Banksia. Getting out of the car, the first plant I saw was H. huegelii. Checking, I noted that it had obtuse leaves with no distinct groove. A metre or so away was another plant of H. huegelii ... that's interesting - this one had acute leaves with a distinct groove. A quick 50-metre walk through the area revealed dozens more plants - and all fell into one of two distinct groups based on these leaf characters. We happened to be in the middle of a mixed population of two distinctly different morphotypes.
That evening (after a successful Banksia field trip) I decided to quickly check to see which of these two morphotypes matched the type of H. huegelii. Global Plants answered that - I searched for the type (scanned from the Naturhistorisches Museum in Vienna) and zoomed into the specimen. It matched, without a doubt, the obtuse-leaved plants. Next step was to check for synonyms of H. huegelii on the Australian Plant Census and in old literature on the Biodiversity Heritage Library. These showed that another name, Candollea striata, had been synonymised with H. huegelii by Bentham in Flora Australiensis. Back to Global Plants, bring up the type of C. striata - this one in Paris - and there were the acute leaves and narrow groove of the other morphotype, as clear as day. It was looking very much like two species rather than one.
The acid test in situations like these is usually to go back into the herbarium. The Western Australian Herbarium holds over 270 specimens of H. huegelii. The next morning I worked through all of these, to see if the difference would hold up. It did - I was able to assign every specimen unambiguously to one or other of the two forms. Over 200 of the specimens matched Candollea striata while nearly 70 specimens matched H. huegelii sensu stricto.
But what of H. pachyrrhiza, one of the species where this story started? This had always seemed more geographically restricted than H. huegelii (as we used to understand it), to the Darling Range just east of Perth between Bindoon and Jarrahdale. Now that I had split H. huegelii into true H. huegelii and C. striata, the next step was to figure out their respective distributions. Scanning the specimen barcodes, I extracted specimen georeferences from the Herbarium database, and popped them into Google Earth to map the distributions. This immediately showed that true H. huegelii and H. pachyrrhiza were almost identically distributed. Having removed C. striata from H. huegelii, they were also morphologically suspiciously similar.
A quick check back at the Biodiversity Heritage Library showed that the original author of H. pachyrrhiza (the German botanist Ernst Steudel) noted that the plant was distinctive in having a thick taproot and numerous short, erect stems with hairy leaves; the specimens at the herbarium bore this out. But - this is exactly what would be expected in fire regrowth. A bit more fieldwork quickly solved the mystery - H. pachyrrhiza is merely post-fire regrowth of H. huegelii.

The taxonomic outcome of all this will be a quick paper, to be published in the Western Australian Herbarium's journal Nuytsia, combining C. striata into Hibbertia (as H. striata) and sinking H. pachyrrhiza into a recircumscribed H. huegelii. A small mystery, and an understandable mistake made 150 years ago, solved.
So why is it so great being a botanist? First is the privilege of being able to discover such things. And second is having such great resources to work with - Global Plants, the Biodiversity Heritage Library, Google Earth, our specimen databases (and from those, other resources like the Australian Virtual Herbarium and Atlas of Living Australia). Using these, I was able to have this whole situation pretty much wrapped up and ready to write up in a little over a week, where only a few years ago it would have taken many months.
Only problem is - I didn't need to visit Paris and Vienna to view the type specimens!