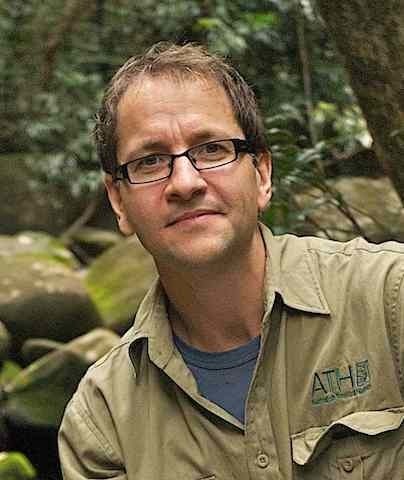 A long time ago, in a city far, far away... I began engineering studies.

It seemed a logical choice at the time. For a boy growing up with a sciency bent in a small and unremarkable country town in northern New South Wales, it seemed engineering as a career made sense, or so said my rather unimaginative high school careers advisor. Off to the big smoke I went, and 6 months into a chemical engineering degree, I fell in love with .... biology.

Engineering and I negotiated an amicable separation and my new crush led ultimately to a postgraduate degree at the University of New South Wales (Sydney), where I developed research skills and credibility in phylogenetic systematics of plants. After graduating I was off overseas where I worked on the evolution of photosynthesis in bromeliads, using a phylogenetic approach, at the Smithsonian Tropical Research Institute in Panama and Oxford University in the UK.

I returned home to Sydney in early 2000 and after a period of research odd-jobbing (ranging from taxonomically revising a small genus of vascular plants, to working on the genetics of gestational diabetes), I landed dream job #1: Tropical Botanist at the National Herbarium of NSW. A hugely satisfying 6 years of research and practical herbarium taxonomy ensued, until as fate would have it dream job #2 emerged, fully formed, seemingly from nowhere. Strange how the most wonderful things happen when you least expect them.

Dream job #2 is what I do now: Director of the Australian Tropical Herbarium, a joint venture between CSIRO, the Queensland Government, The Australian Government Dept. of the Environment, and James Cook University. This dynamic and growing organisation, located on JCU’s Cairns campus, aims to be a significant global player in tropical plant biodiversity research. My role is roughly equal parts management/leadership and research. The latter involves studies of the origins, evolution and classification of plants and deals broadly with the questions: how many plant species exist, where do they occur, how are they related and how have they evolved? More specifically this research is:

•       discovering, naming and classifying new plant species and determining the evolutionary relationships among them,

•       mapping the distribution of ecosystems, species and genetic variation within species across the landscape,

I’ve been lucky enough that research has taken me to many biomes and countries including the Republic of Panama, Venezuela, Papua New Guinea, Indonesia, New Caledonia, Malaysia, New Zealand and the United Kingdom.

In addition to institutional and science community leadership and research roles, I contribute to biodiversity and science policy development and implementation through roles on a number of advisory committees and expert panels for the Australian and State governments, and the non-governmental research sector.

Today, if I wanted, I could go on a bushwalk and sequence a genome.

That might not sound very remarkable as my joints freely bend, I can see, and I don’t mind getting wet, muddy, sweaty and molested by insects, or my skin breached by armed plants and burned by the sun. In fact I sort of enjoy all of those things; well, not individually and in isolation (no, I do not have a dungeon...), but as part of the rich experiential symphony of life in the great outdoors. And being a taxonomist, field work is actually part of my job. I describe life, not in epic poetry, or stunning photography, but in scientific papers that are by some measures, a bit dour. I describe new species – taking the raw, unvarnished thrill that the discovery of an organism unknown to science elicits, and turning it into a scientific manuscript reporting in methodical, formal terms the characteristics of that new organism and giving it a scientific name such that that species becomes available for science and society.

And the life that I describe is found in the bush, and not uncommonly in a country like Australia where about 200 new plant species are described by taxonomists like me every year. THat's an extraordinary figure - 200 new plants a year - and even more startling when you realise it is ten percent of the world’s total. For a taxonomist, Australia really is the lucky country – so many species, and so much bush in which to walk and discover. And with so many new species of plants turning up, discovering a new one is often rather unremarkable.

It is also rather unremarkable that today, I can sequence a genome. I mean unremarkable not in the sense that it is unworthy of awe (because sequencing genomes is awesome), but unremarkable in the sense that everybody, at least in biology and medicine, is doing it. But this socialisation of genomics is very recent. The technology for reading genomes - the sequence of nucleotide bases (A, C, G, T), or ‘letters’ that inscribe the language of life, DNA – has advanced in such a mad headlong rush that by the time the sun set on 2015 it became possible to do in a weekend for less than $2000 something that in the 1990’s took more than a decade and at least half a billion dollars. This extraordinary efficiency gain has outstripped even that most celebrated example of technological advance, the decline in cost of computing power represented by Moore’s Law. This law describes the observation that the number of semiconductors that can be packed onto a silicon chip roughly doubles each year, which roughly translates to a halving of the cost of computing power each 18 months because of the additional savings made through chip manufacturing advances. Because of Moore’s Law my new mobile phone is more powerful in computing terms than my ten year old desktop machine, now unloved and gathering dust under the desk and accidentally assaulted by the toe of my leather winklepickers whenever I yawn and stretch. But the rate of advance in DNA sequencing technology blows Moore’s Law away. It wasn’t always the case. Prior to 2007 the cost of sequencing genomes was falling in line with that of computing power, meaning it could be roughly described by Moore’s Law. Thereafter however, things got really interesting. The cost fell catastrophically because new, more efficient sequencing technologies came online and in the years following drove cost reductions so spectacular that in the time it took computing power to become about 15 times cheaper, sequencing genomes became about 10,000 times cheaper. It’s hard to underestimate the impact this has had on biology and medicine, which are being revolutionised by access to genome data. Even taxonomists like me, working in small labs on small budgets, can now sequence genomes. It is fast becoming a routine, unremarkable, part of the work that we do.

But what is truly remarkable – transformative, disruptive, revolutionary ... whatever – is that it is now technically possible to go for a bushwalk and sequence a genome at the same time and in the same place. I’ll let that sink in.... as a scientist, I am now able to carry all the equipment necessary to sequence a genome into the field with me and sequence the genome of an organism I collect on the spot. Recently, Oxford Nanopore, a biotechnology company based in Oxford, UK, started selling a new DNA sequencing device, the minION. This device is smaller than a mobile phone, plugs into the USB port of a laptop computer, costs about $1000, and can sequence a bacterial genome between lunch and tea. The company is not the only one producing genome sequencing machines, but it is pretty much the only one whose signature device does not require a large, sturdy benchtop to hold it up, a specialist technician to run it, and hundreds of thousands of dollars of cold hard cash to purchase it. This is truly disruptive technology, which is really saying something in the context of a field that has been in constant disruption for nearly ten years. Its a game changer. While some technical details of the device need improvement (its accuracy is still unacceptable for many applications) this early generation product brings us within sight of the day when genome sequencers will be as much part of the field biologist’s toolkit as a GPS unit is now.

Will this day come? I think so. In fact it will come pretty soon for me. I am hoping to take one with me in March 2017 when I participate in a species discovery expedition on Cape York Peninsula in the remote northeast of Australia. As part of the multiyear BushBlitz species discovery partnership, I will be helping survey Quinkan country, a sandstone landscape renowned for its extensive Aboriginal rock art near the small town of Laura. I’m astounded that I will witness scientists bring samples in from the field that they think may represent species new to science, extract the DNA and offer a small drop to the sequencer who in a few hours will deliver its verdict, confirming or denying their hunches. Imagine the field efficiency gains this will drive: “Jenny, the DNA of that one doesn’t match anything known so very probably a new species. See if you can get more specimens tomorrow.”, or “Boring, just a malnourished and malformed individual of a well known species, don’t bother with any more of that one”. The efficiency gains are important, but rather prosaic. What is deeply inspiring is the utter collapse of the barriers to genome knowledge. A species discovered in the time of the so-called father of taxonomy, Carl von Linne (a.k.a Linnaeus, 1707-1778) would have to wait around 250 years to have its genome revealed. A species discovered today need only wait a few hours...

And what kind of world will this technology usher in for taxonomists and other biologists? What will we do when we are as blase about sequencing whole genomes in the field as we are about cooking our camp dinner? Its hard to fully imagine, but here are a couple of possibilities beyond the obvious “What species is it, what is its population genetic structure and who is it related to phylogenetically?”:

·      Real time population diversity assessment: by comparing sequences of samples from across the local range of a species one day, researchers may be able to pinpoint the best areas for the following day’s sampling or survey.

This new world is one of great promise and to maximise its opportunities, I want some bright spark to build me a mobile genome lab. I’m thinking a capable 4WD with a raised roof and internally fitted out with a bench, a portable electricity generator and fridge, and the small lab items needed for extracting and purifying DNA to load into the sequencer. And if I pitch this vehicle as the ‘Genome-o-Rover’ then I might just attract the attention and sponsorship dollars of a certain vehicle manufacturer that shall remain nameless. I would volunteer my time to travel the nation, sequencing genomes in situ in the most remote and inhospitable locations, and dropping in to schools and communities along the way to talk about what I am doing. And if I do my job well, I just might find myself a couple of decades from now passing the baton (or sequencer) to some bright eyed graduate who asked me a probing question about plant DNA in the outback 20 years prior.

Who will join me?