"Anybody could do that," replied the young fellow contemptuously. "I want to distinguish myself."

"Then I'll tell you what you'll do, Moriarty. Take a narrow branch of some scientific study, and restrict yourself to that. Say you devote your life to some special division of the Formicae?"

"Formicae. The name is plural. It embraces all the different species of ants."

"Why, there's only about three species of ants altogether; and there's nothing to learn about them except that they make different kinds of hills, and give different kinds of bites. That sort of study would about suit you. Fat lot of distinction a person could get out of ants."

Moriarty could be forgiven for thinking there were only three species of ants on Runnymede Station. Those were the common species, the ones he saw every day. Moriarty didn't know that most species in any taxon are naturally rare.

Ecologists know about rarity. They do an exhaustive survey of some group of organisms on a study site, and find that there are a few very abundant species and a "long tail" of much less abundant species. They build a rank-abundance diagram (https://en.wikipedia.org/wiki/Rank_abundance_curve) from their results.

For ecologists, those many rare forms are a statistical nuisance, and there are hundreds (thousands?) of published articles in which the rare forms have been deliberately ignored: "Species represented by 10 or fewer individuals were excluded from the analysis."

The rare forms can also discomfit the ecologist with a taxonomist on tap. The latter has no trouble naming the abundant species, because these were collected and described long ago. But when the taxonomist sends the ecologist a final species list, many of the rare forms that were collected only have code names like "Improbabilidae sp. 1", because they hadn't been seen before. By anyone.

The rank-abundance relationship applies to terrestrial, freshwater and marine taxa. It's one of the principal obstacles to naming and describing the entire Australian biota, but it's not often discussed.

Think of taxonomy as the discovery, documentation and classification of life. The latter two activities can increase more or less proportionately with resourcing. The more money you put into training and funding taxonomists and systematists, the more species get properly documented and classified.

Discovery is different, because the amount of money needed to collect specimens increases with the rarity of the species. On day 1 of a field trip you can find 50% of the species at a study site. As time goes on, the rarer species drop one by one into the collecting bucket, but even after a week the species accumulation curve (https://en.wikipedia.org/wiki/Species_discovery_curve) may not have levelled off.

I'm currently working up a set of Tasmania's rarest millipedes, some of which are only known from single specimens. Not only are these species naturally rare, they have jackpot distributions on a small spatial scale. If I'm lucky, I'll find a jackpot of several adults in a metre-square patch of forest litter. Most of the time I'm unlucky. I'll go to the only known locality (usually it's a revisit to one of my previous sites) and won't find the target species, just new locality records for more abundant ones. So I keep looking. Field trips cost time and money, and these rare forms are costing far more than their more abundant congeners and confamilials did.

Mine is nearly a "best possible collecting" scenario, because millipedes in Tasmania can be collected in the right life stage at any time of year. Think of all the rare Australian species which are only findable or recognisable when the the season or the weather is right! 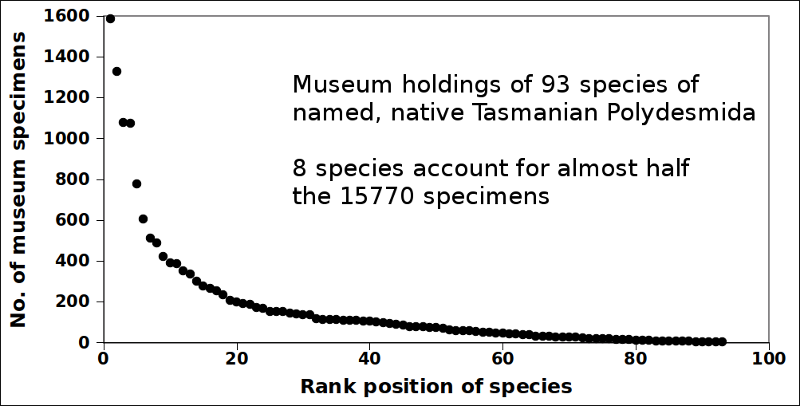 A community blogging platform for the Australasian taxonomy and systematics community